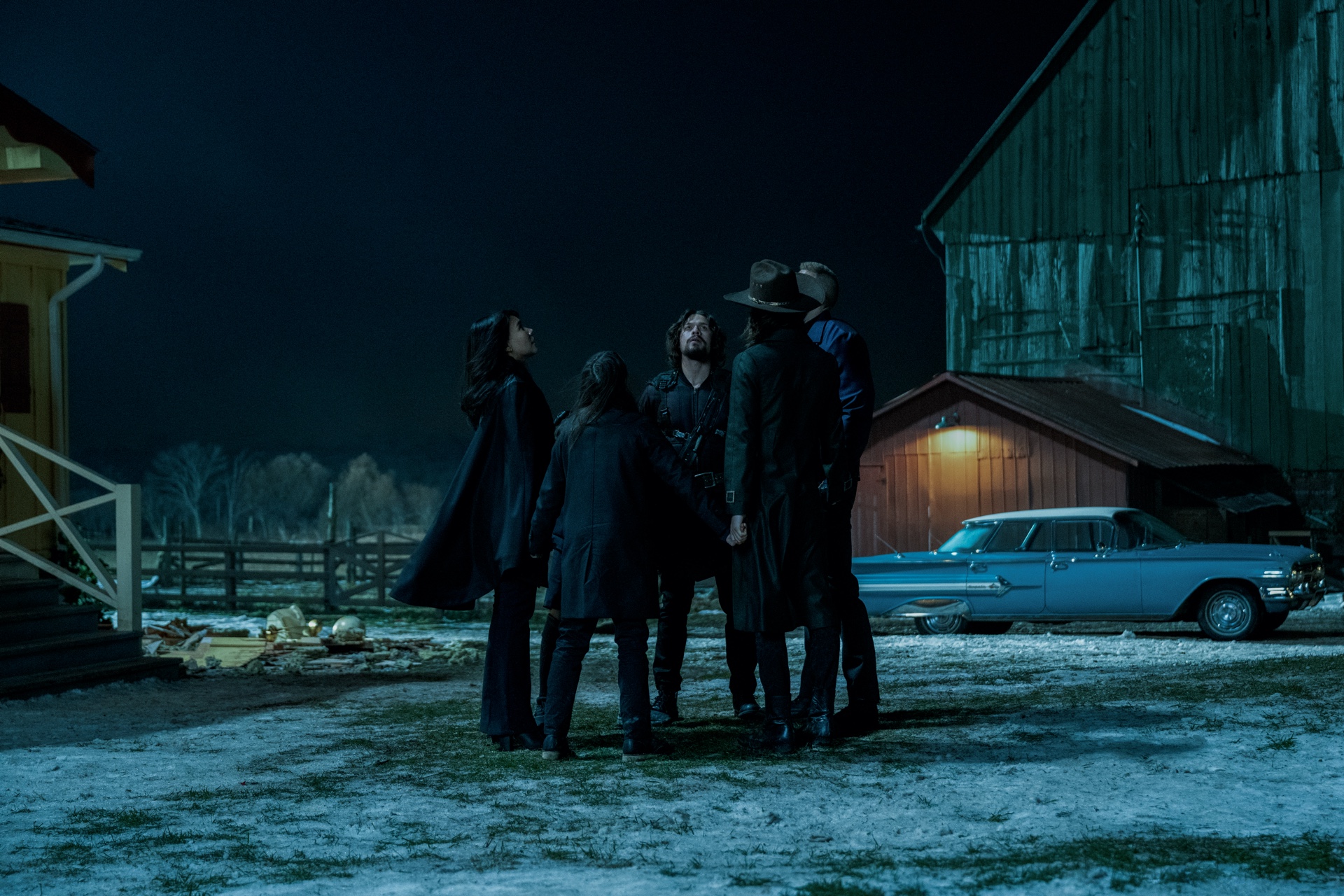 The following contains spoilers for The Umbrella Academy season 2.

One of the most exciting parts of any new superhero story is finding out the characters’ respective powers and how they affect their lives and personalities.

We often forget the “Academy” portion of “The Umbrella Academy.” The Hargreeves family was never a super-proficient Fantastic Four-style crime-fighting team. They were more of a work in progress under the instruction of a truly terrible man. As showrunner Steve Blackman explains it: “(Reginald Hargreeves) was not a very good teacher.”

That’s rough for The Umbrella Academy as individuals but exciting for dedicated fans of the show. As season 2 reveals, the Hargreeves might have some tricks up their sleeves that even they didn’t know about. With that in mind, let’s run down The Umbrella Academy’s powers and how they evolve in the show’s second season.

Per comic book lore, Reginald Hargreeves numbered his “children” by how useful they were to him. If that is indeed the case then Mr. Hargreeves was suffering from a severe lack of imagination. Because Luther, however useful he might be, has arguably the most unremarkable super power. Luther’s super power is basically the most generic, entry-level ability imaginable: super strength. Luther has always been strong and that strength seemingly magnified when he was injected with gorilla DNA to save his life.

Our understanding of Luther’s power doesn’t progress much in season 2. Though there are some interesting inconsistencies with how his super strength is applied. His body is strong enough to stop a Soviet RPG but weak enough to bleed from some well-placed punches in a bare-knuckle brawl. Perhaps Luther’s mental state is important to the application of his strength. When he feels emotionally vulnerable – so too is his body. But when he’s all charged up on adrenaline, pity the Soviet soldier who tries to shoot him.

Diego gets the biggest power evolution in season 2 of all his siblings. Number Two’s power had previously been understood as a supernatural skill for knife-throwing. Then the finale of season 2 reveals that that mastery in knife-throwing extends to the manipulation of any kind of projectile when he stops a barrage of bullets with his hands, Matrix-style.

“If you think about Diego’s power, he can, with his mind, control the trajectory of objects,” Blackman says. “Basically he likes throwing, so he can throw his knife and he can make it go in weird, odd curvatures and directions. As I go through seasons we’ll see more of that. But moving a knife through the air – an extension of that is then being able to manipulate bullets through the air.”

In Gerard Way and Gabriel Bá’s comic series upon which the TV show is based, Diego has a different superpower altogether. Though comic Diego is indeed fond of throwing knives, his actual power is the ability to breathe underwater (or perhaps the lack of a need to breathe at all…it’s unclear how that works as he has no visible gills). This helps explain his superhero callsign “The Kraken.”

During a season 2 set visit, Diego actor David Castañeda told Den of Geek that the show had ultimately decided against incorporating that power for the character.

“You’ve got Jason Momoa doing that a hundred times better anyway,” he said.

Just about every superhero team has a character whose power is so useful and convenient that the storyteller often has to contrive of reasons for them not to use it. Allison Hargreeves is quite clearly this character for The Umbrella Academy.

Allison has the power of “prevarication.” Or to put it more simply: her lies become real. In the comic books, this ability is so powerful that when Allison lies about going to the library so she can sneak off to make out with a Polynesian knife-thrower, a second Allison actually pops into existence and goes to the library!

Sometimes the show can struggle a bit with the rules and applications of Allison’s ability. As Five tells Reginald in season 2 “Allison can rumor anyone to do anything,” suggesting that her power is limited to bewitching human beings. But there are other times in which Allison is able to manipulate reality itself. She does so in the beginning of season 2 by telling Soviet soldiers “I heard a rumor I blew your minds” followed by their heads exploding.

It’s more likely then that Five just has interpreted Allison’s power incorrectly…or is just trying not to really freak Reginald out. Regardless, Allison is often intimated by the scope of her own powers. And that’s how the show frequently justifies her sparse deployment of them.

“(Her power) has always backfired maybe not immediately, but in the long game,” Allison actress Emmy Raver-Lampman says. “She sees them as more of a curse than a blessing.”

There’s a reason why Klaus has “Hello” and “Goodbye” tattooed on his palms. He is quite literally: a human Ouija board. Yes, Klaus’s main power is his ability to communicate with the dead. This has extremely useful applications as seen in season 1 when he uses it to intimidate Hazel and Cha-Cha.

In season 2, however, this power gains more physical implications. As seen in the season’s opening scene, Klaus is able to summon ghosts to do battle with his enemies. We saw a little bit of that in season 1 when Ben briefly became corporeal but the application is even more destructive and useful this time around. Klaus is also able to let the dead inhabit his body. Ben discovers this to his great delight in season 2.

Like Diego, however, Klaus is missing one of his powers from the comic book series. Number four in the comic possesses the power of telekinesis and can move stuff around with his mind. This proves to be so powerful that he’s able to stop the moon from crashing into Earth. Not bad! The weird drawback is that his power only works when he’s barefoot. Klaus in the show is frequently shoeless as well but that just seems to be a personal preference.

Number Five doesn’t have a name but he does have a pretty righteous superpower: time travel. Here’s the thing about time travel though…it’s hard, even for someone who possesses the innate ability to use it.

In season 1, Number Five tried to prove to his father that moving back through time was possible by jumping years ahead and then returning. As it turned, out Reginald was probably right as he usually, annoyingly was.

Five was able to return though, but only after years of experimenting and crunching the numbers, trying to get the equation right. In season 2, Five discovers some easier uses for his power. For starters, there are his “blinks.” Five blinks through time and space to essentially teleport. This is tremendously helpful during the many fist fights he finds himself in.

“He gets a lot stronger in season two in terms of how many blinks he can do,” Five actor Aidan Gallagher says. “I think in season one, it was like six blinks, and now it’s probably double that. And that just means that our fight scenes get to be a lot cooler.”

In addition to the blinks, Five also realizes that time travel on a smaller scale is much easier to pull off than his big jumps.

“Five definitely understands a lot more about the science of time travel this season. So he’s able to operate it a lot more efficiently. In episode 10, you see Five use Hargreeves’s advice to travel back a few seconds instead of decades. And that saves the family.”

For much of the series, Ben’s superpower is simply being dead. Yes, Number Six tragically died (of a still-unknown cause) in his teens. Since then he’s been mostly hanging out with his spooky brother Klaus.

Prior to Ben’s death, however, his real superpower was quite imposing. As the comic explains, Ben is able to summon monsters from other dimensions and manifest them through his body. That’s why he’s known as “The Horror.” In the comic and on the show Ben exclusively uses this power to procure enormous tentacles through his stomach. He’s like a forward-facing Doc Ock.

Now that Ben is alive again (albeit in a new timeline) it will be interesting to see if he maintains this power or receives a new one.

Reginald’s insistence that he numbered the children by usefulness might make more sense if he numbered them in reverse order. For, while all the Hargreeves children are powerful, only one of them was so powerful that their father had to subdue that power with pills.

With Leonard’s help, Vanya ditches those pills in season 1 and unleashes her awesome might. Dubbed “The White Violin” in the comic series, Vanya is able to manipulate sound into truly awe-inspiring spectacles of energy. Her eruptions of sound-based power are near nuclear in nature – able to shred apart an FBI building or blow a chunk off of the moon.

One interesting thing to keep an eye on as the series moves forward is how Vanya is able to use her powers for good now that being the harbinger of the apocalypse is presumably in her rear view.

The Umbrella Academy season 2 finale makes explicit what was pretty apparent early on. Lila (Ritu Arya) is indeed a Hargreeves’ “sibling.” Well…sort of.  Though she obviously didn’t grow up with them under the tortured tutelage of Reginald Hargreeves, Lila was born on October 1, 1989 just like the other 42 extraordinary children.

And just like the other 42 extraordinary children, Lila has an extraordinary power. She is able to mimic the power of any other super-powered individual she comes into contact with. This is how she is able to match Luther’s strength, out-Rumor Allison, and ultimately jump through time away from Five after she’s defeated. Little is known about exactly how that powers work now but we’ll undoubtedly get to see more of it should The Umbrella Academy receive future seasons.

Harlan is a most-expected power-user in The Umbrella Academy’s second season. As a child in 1963, he is certainly not born on October 1, 1989 like the rest of the super-powered individuals in this universe.

So how does Harlan suddenly display Vanya-like powers? Well, due to Vanya’s actions of course!

“It’s supposed to be a little mysterious. But when Harlan has seemingly died, Vanya did something to him in the way she revived him. She’s not realizing at the moment, but she gave a little bit of herself and some power to him. The effect there is that you can see a little bit of this yellow glowy stuff go from her to him,” Blackman says.

Harlan is a bit of a red herring superhero then. Thing is though that even though Vanya stops his near-apocalypse inducing freakout, a superpowered Harlan might live on into the ‘70s, ‘80s and beyond.

“Was she successful? Because (Harlans) seems to still have a little bit of an ability when we see him in the last episode,” Blackman says.