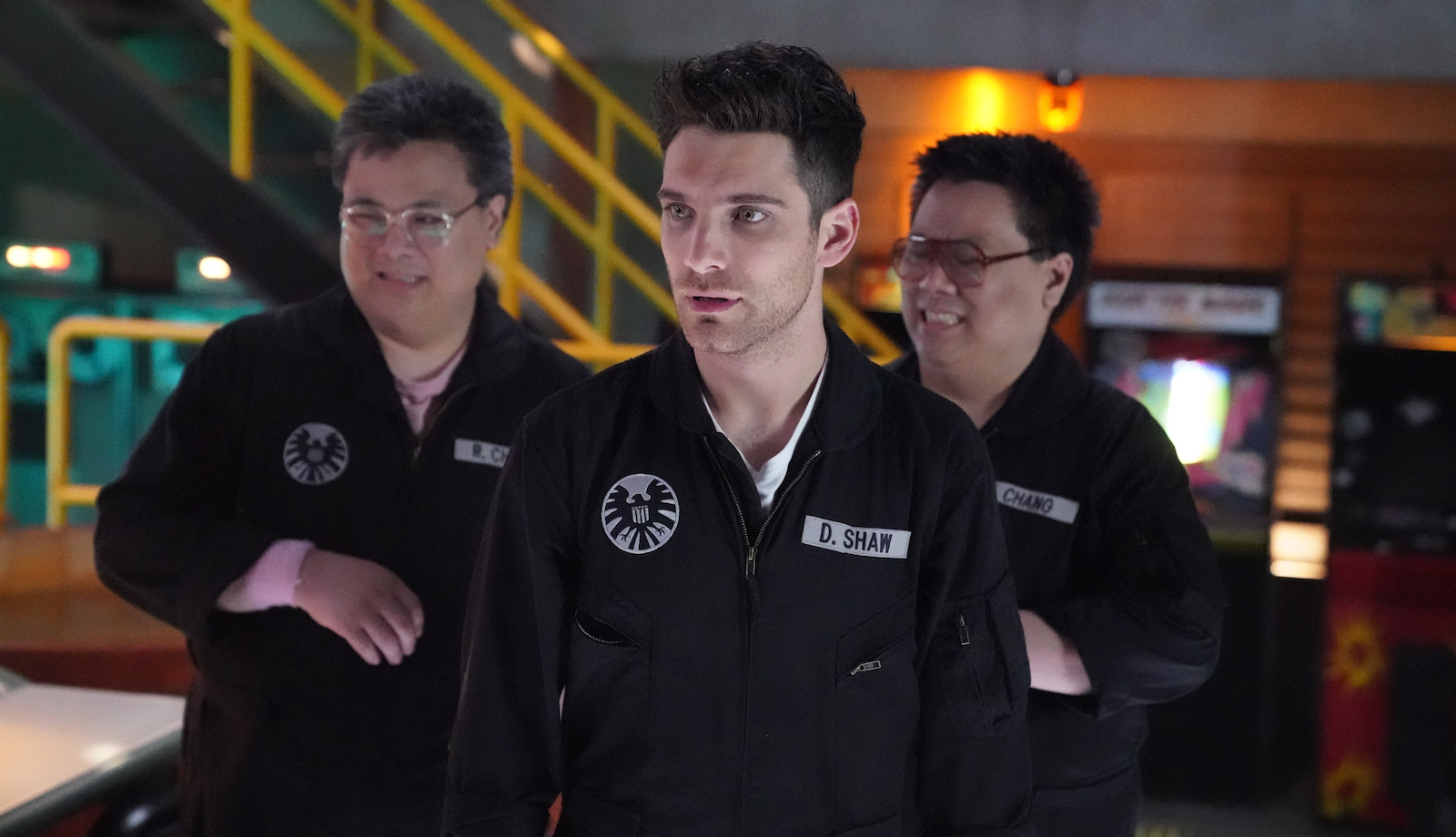 This review contains spoilers for Agents of SHIELD.

References to the 80s are all the rage in pop culture, from Stranger Things to The Americans, so it should come as no surprise that Agents of SHIELD wanted to have fun with its time travel storyline now that the team has reached the decade of excess. Unfortunately, although the movie allusions were entertaining and appreciated, the stylistic narrative choices felt very much out of place. The use of Deke’s perspective provided an explanation of sorts for the over-the-top antics, but the lack of a bookend for that technique at the end of the episode left the whole episode feeling a bit like a parody of itself.

“The Totally Excellent Adventures of Mack and The D” had good intentions, and not everything missed the mark. Early scenes of Sybil persuading a computer support specialist to help her began as a text solicitation similar to WarGames’ “Shall we play a game?” and went down a decidedly Weird Science path as the nerd decided she sounded like a real girl who needed a new body to inhabit. Even though the end result was decidedly more robot-like than human, the clear resemblance to Johnny 5 of Short Circuit (a nod later confirmed by Mack’s trademark nickname for his enemy) with the bonus cylon-like eye was a real treat.

The more poignant aspects of Mack’s recovery and altered personal timeline were also enjoyably dramatic; Agents of SHIELD has always done well with these character moments. Awful beard notwithstanding, Mack has always had family trauma as a significant part of his back story, from the loss of his daughter Hope in real life and in the Framework to the conflict with his brother who joined the anti-Inhuman Watchdogs, and his work on the model cars was an apt reminder of his origins as a mechanic while providing an oblique explanation of how he may have earned an income during his time alone. As a result, his frustration with Deke’s shenanigans when he was finally pulled out of isolation felt very authentic.

But let’s be real: Deke’s team of misfits were nothing more than 80s film archetypes meant to elicit the same appreciative smiles that the many successful robot references (such as the Dalek-esque “Exerminate!”) did. But machines don’t have the burden that human characters have to be believable and deserving of the audience’s interest as they interact with the people we actually care about. Agents of SHIELD fans may have felt they deserved the type of organizational rewind Captain Marvel provided, but instead they got an abandoned Lighthouse filled with wannabe agents in a decade when SHIELD would have been in full force.

The minimalist approach shouldn’t be too surprising given that this is a bottle episode of a series in its final season, but to add insult to injury, Agents of SHIELD chose to throw in fountains of blood as the Chronicom hunters attacked in a misguided attempt to amusingly allude to 80s horror flicks like Halloween or A Nightmare on Elm Street. At first, it seemed as though the exaggeration came from the manner in which Deke may have related his adventures to May in his debrief, but the narrative style continued even after the Zephyr crew reunited with their missing team members in 1983. Having Deke say, “I told you you wouldn’t believe me,” wasn’t enough to forgive these clunky spoofs.

Sure, we’re glad Coulson was saved to a hard drive, confirming that death is indeed his super power, and the fact that Sybil was able to do the same helped temper the convenience of that plot device. Plus the Max Headroom appearance of Coulson’s image was quite fitting as was the use of a VCR and other 80s tech Deke was able to cobble together, no matter how implausible. Maybe it was the combination of so many comedic, hyperbolic references that cheapened the overall effect, who knows? Giving Mack action hero lines like, “Somewhere, somehow, someone’s gonna pay,” or “Looks like more metal for the scrap heap,” for example, undermined his emotional journey elsewhere in the episode.

After all, the fact that Deke was taking care of young Alfie and Ruben Mackenzie was quite sweet, and hopefully Mack and “The D” will carry their 20 months away from the mission with them as fond memories. In the meantime, Nathaniel Malick, none the worse for having tried to take on Quake powers seven years ago, has his hands on the time stream device the Chronicoms have been using to try and change SHIELD history. As usual, Agents of SHIELD packs a punch in its epilogue, and we can hope for a return to the style of adventure to which we’re accustomed in the back half of the season.

Paper Mario: The Origami King Review – Innovative Turn-Based Combat
PlayStation 5: Rumored Feature Allows You To Load Specific Parts of a Game
How The Last of Us HBO Series Will “Expand” on the Original Game
Stargirl Episode 12 Review: Stars & S.T.R.I.P.E. Part One
The Universal AMC Deal Could Change Moviegoing