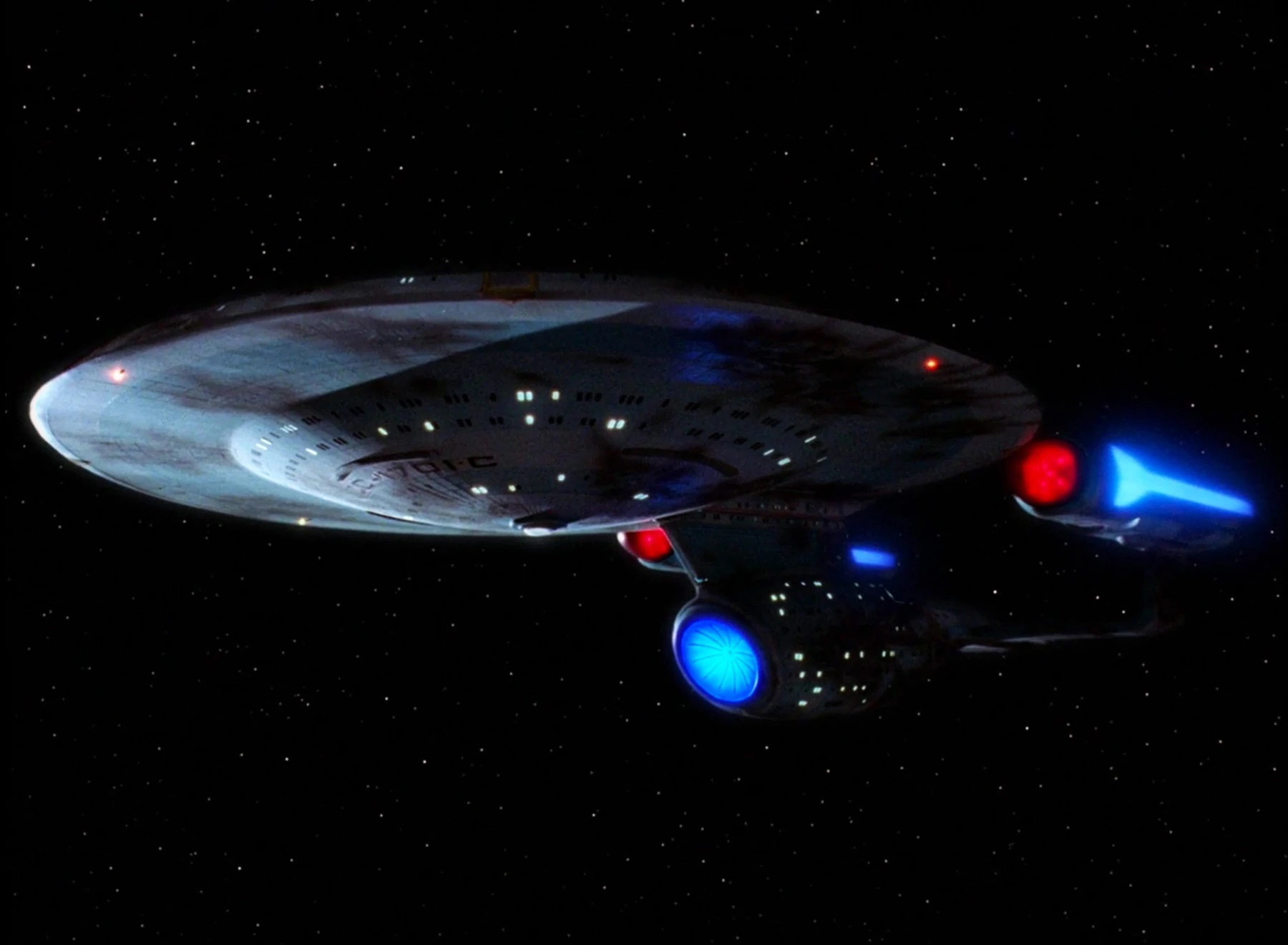 Mild spoilers ahead for Picard Season 1 and Discovery Season 2.

Right now, somewhere, several new Star Trek projects are being planned and fans can only guess as to what those things will be. Relatively speaking, shows centered around Spock’s human sister or an aging Jean-Luc Picard would have seemed pretty far-fetched if you asked a fan about those ideas in 2016. Similarly, the idea of recasting the Original Series actors for the 2009 Star Trek reboot would have sounded crazy to fans in 2003, when Enterprise was still on the air. New Star Trek projects are interesting because they’re unpredictable to us fans.

So, at the risk of being very wrong, one unpredictable setting for a future Trek film or show could be both ridiculously exciting and very familiar. Let’s imagine a new Star Trek that also looks exactly like a 1980s classic Star Trek movie. Let’s talk about the first decade of the 24th century.

The 23rd Century is pretty full…

Here’s what we know about the 23rd century in Star Trek: A lot. Though the early 2300s are a little vague, we know that the USS Enterprise NCC-1701 has been around since 2245 (under the command of Robert April) and we know that officers like Philippa Georgiou and Christopher Pike attended Starfleet Academy in the 2220s. There’s a certain vagueness about how the Starfleet of the 2150s — depicted in Enterprise — became the Starfleet of the 2220s, 30s, 40s, and 50s, but there are some hints.

In Star Trek Beyond, we got a vague sense of what Starfleet looked like around the 2160s and into the 2170s. The USS Franklin, specifically, exists in the Prime Timeline because everything that happens before 2233 is the same in both the Kelvin Timeline and the Prime Timeline. This is also why we have a good idea of what Starfleet looked like in the 2230s. In theory, the uniforms worn by the crew of the USS Kelvin are Prime Universe canon, because the divergence in the timeline happens at that point. (So, if you want to picture young Pike and young Georgiou in those minimalist uniforms from the opening of 2009’s Star Trek, be my guest.)

After the 2240s, we obviously know a shitload about the rest of the 23rd century. Original Series pilot “The Cage” happens in 2254, Discovery takes place in 2256 and 2257, the “five-year mission” of The Original Series spans 2265-2270, and the classic feature films happen from the early 2270s (The Motion Picture) all the way to 2293 (The Undiscovered Country and the opening of Generations). Upcoming series Strange New Worlds is set to fill in the 23rd century even more, likely taking place between 2258 and 2264. In short, the most famous century in Star Trek is fairly well documented.

Here’s what we know about the 24th century: Pretty much everything from 2364 to 2399; in other words, the totality of The Next Generation, Deep Space Nine,Voyager, all the TNG films, and most recently, Picard. But, what about before 2364? What’s Starfleet and the galaxy like before “Encounter at Farpoint?”

Here’s pretty much the only thing we do know: For at least the first four decades of the 24th Century, Starfleet ships and crews looked almost exactly like they did in the era of the post-Wrath of Khan classic films. We know this because nearly every single flashback or time travel storyline in TNG that depicted Starfleet in the “recent” past, defaulted to the “monster maroon,” movie-era uniforms. Many of the starship classes also looked very similar (or were the same) as the ones we saw in the classic films.

Jack Crusher wore the maroon when he recorded his hologram to baby Wesley Crusher. Beverly and Jean-Luc both wore this uniform in their early careers, and certainly, as cadets. The crew of the USS Enterprise 1701-C all wore this uniform and that ship — the Ambassador Class — looked more like something from the classic Trek films, than from TNG. (Especially on the inside.)

So, who cares? We know very little about the early 24th century, but we know what all their ships looked like, and we know that they all wore the same clothes, more or less, that Spock and Kirk wore during their movies. Big deal, right? Well, maybe not. Because there’s a million-dollar question here no one is asking: Why didn’t Starfleet change for 40 years?

At the beginning of TNG, you really get the sense that Starfleet is pumped about exploring strange new worlds and heading out into a new part of the galaxy.

Throughout the classic TOS films, post Wrath of Khan, you don’t get that sense. If anything, you get the sense that Starfleet is more worried about “keeping the peace” than doing any exploring. Even by the era of Captain Rachel Garrett and the Enterprise-C in 2349, it feels like Starfleet is on edge, and perhaps, not really moving forward. There’s actually 70 years in between the end of the TOS era and the beginning of TNG, but it’s those first 40 years that seem to be the most interesting, mostly, because, at a glance, it seems like nothing happened there. And other than the Enterprise-C, the most famous starship from this period is easily the USS Stargazer.

In official canon, we know Picard was in command of the USS Stargazer from 2333 to 2355, but he served on the ship as the “flight controller” before that, and maybe as the first officer. (Or maybe both at the same time, kind of like Number One in “The Cage,” Discovery, and Short Treks.) And, before we met Dr. Benayoun in Star Trek: Picard, we’d never actually met a living member of Picard’s crew of the Stargazer. If we’re looking for younger characters who could populate an early 24th Century Star Trek film, people who eventually became Stargazer crew members might fit the bill.

Non-canon novels like Vulcan’s Heart, The Buried Age, Reunion, and seven novels in the Star Trek: Stargazer series have played around with Stargazer and this era.

In Vulcan’s Heart, we learned the Captain of the Stargazer in 2329 was a guy named Anton Manning, who attended the wedding of Spock and Saavik, along with a very young Picard. This book specifically is focused on Spock and the Romulans, so it’s a safe bet that a lot of shady Romulan political stuff was going on in the first four decades of the 24th Century.

Star Trek: Picard showed us how the Romulan’s secret anti-android cabal — the Zhat Vash —was repressing A.I. tech in the late 24th Century, but as was made clear in that series, the Zhat Vash have been manipulating the Romulan government for awhile. Picard also introduced us to the Romulan sect of warrior nuns called the Qowat Milat. Again, we only saw these folks active in 2399, after the Romulan government dissolved thanks to the Supernova. But, what were the Qowat Milat like in their prime, say, 80 years prior?

We don’t know what the Noah Hawley Star Trek film project will become. But, what if it was set in 2301, right at the start of the 24th century? This would only be eight years after The Undiscovered Country, which means, hypothetically, this movie would look like a period piece. Even if it was set in 2340, or even 2330, it would still look and feel more like one of Nicholas Meyer’s Star Trek films than anything from The Next Generation.

Aesthetically, this could do a movie a lot of favors by appealing to a beloved era in Trek history. Fans would already feel like the film was familiar, but if it was a true bridge between TNG and the old films, then there would be a ton of new material to explore.

The Future is the Past Is the Future

Right now, the Trek franchise has plenty of prequels set in the 23rd century. We’re good there. Short of remaking the original series, there’s actually no need to do anything more in this century.

If Star Trek is going to do another prequel (or midquel) the setting should be the early 24th century. Whether through the lens of the Cardassian Wars, or future Stargazer crewmembers, it’s time to see what the beginning of this century looked like before The Next Generation came of age. It’s time to go back to a version of Trek where everyone is a redshirt. It’s time to give fans a dose of nostalgia, but surprise them at the same time.

It’s time for the 24th century to be bold.